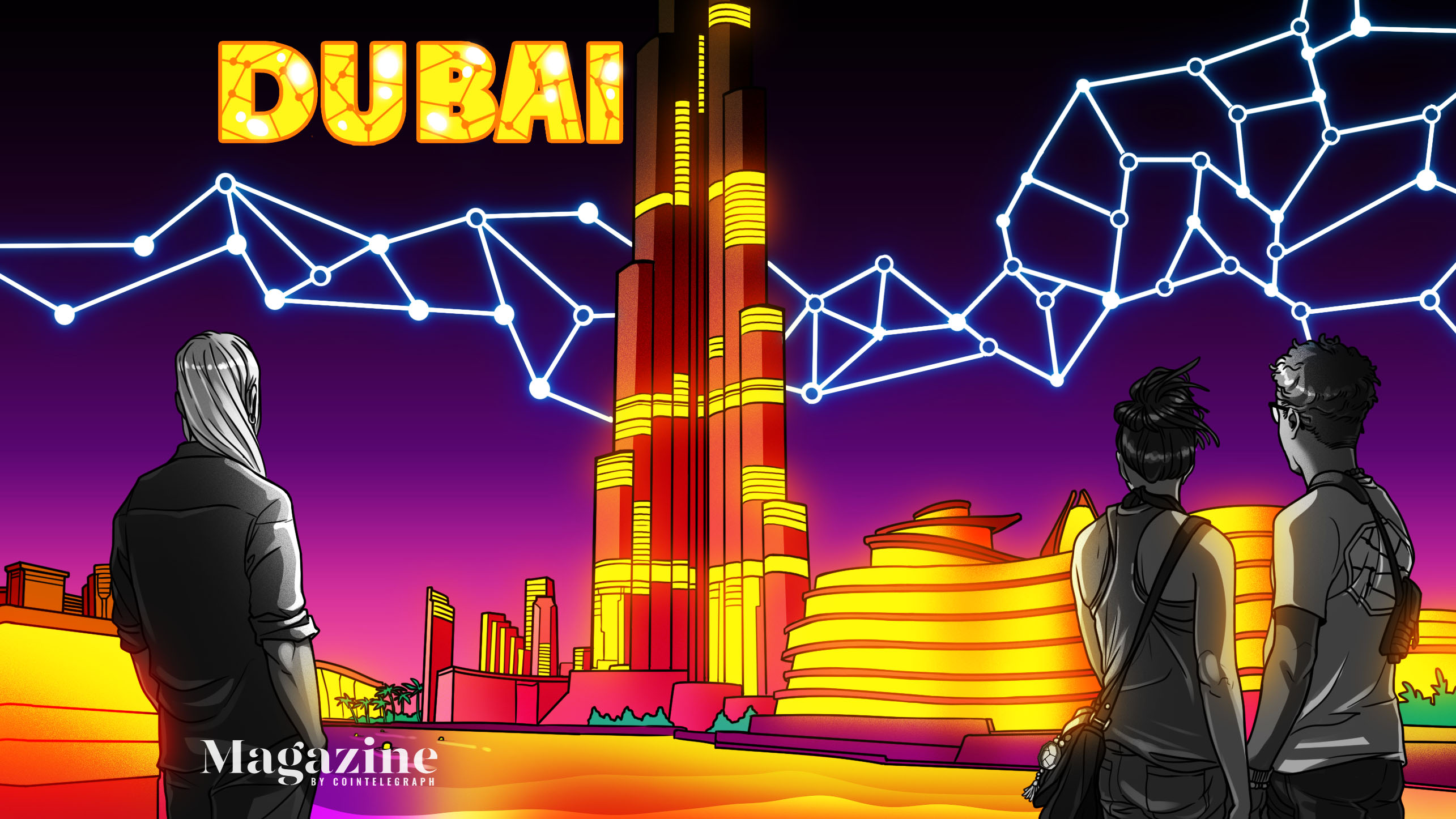 This “Crypto City” guide looks at Dubai’s crypto culture, its most notable projects and people, its financial infrastructure, which retailers accept crypto, and where you can find blockchain education courses.

Dubai, the largest city in the United Arab Emirates, is the eponymous capital of the Emirate of Dubai, one of the seven emirates (monarchies) that make up the UAE. Rising from the Arabian Desert and bordered by the Persian Gulf, the city is often likened to an oasis — its glistening skyscrapers, multiethnic population and high-tech, pro-business atmosphere impose a stark contrast to the landscape.

Before being nicknamed “the city of gold” for its rapid ascent and endless jewelry merchants in the famed Gold Souk market, Dubai was noted as a source of pearls by a Venetian merchant in 1580. Growing from a small fishing village, it signed defense treaties with the British in the 19th century, flourishing as a trading post after its ruler designated it as a free port with no taxation on imports or exports in 1901, also giving merchants grants of land along with a policy of protection and tolerance.

Over a century later and buttressed by oil wealth, Dubai has emerged as a magnetic tax-free crossroads between worlds, embracing its position as an international city that, in both progress and controversy, reflects the reality of the world around it. This glistening era is perhaps best highlighted by the Expo 2020 Dubai world fair, which is currently running until March 2022 after being postponed due to COVID-19.

Existing in the center of global tensions — with Iraq, Iran, Pakistan and Afghanistan on the northern side of the Gulf and Yemen to the South — the UAE has earned a reputation as a neutral player. The combination of relative geopolitical neutrality, a technologically advanced military and a welcoming business environment invites comparisons to Switzerland, the mountain nation where European monarchs and aristocrats have long deposited their gold.

The Dubai Multi Commodities Center’s (DMCC) marketing materials boast that “Dubai gives you access to 65% of the world’s GDP in 8 hours or less,” owing to its location in the middle of Afro-Eurasia, which makes it a natural meeting point between Europe, Asia, Africa and the Middle East. This reality is both geographic and cultural, given that foreigners make up almost 90% of the population. Dubai International Airport, or DXB, is among the busiest in the world, handling 88 million passengers per year.

Attractions like the Burj Khalifa, the world’s tallest building; the Dubai Mall, which is the largest in the world; the Burj Al Arab, a seven-star hotel; and The World Islands and Palm Jumeirah, painted into the ocean with sand, help sell the destination to some 20 million tourists per year. This, naturally, includes the crypto nouveau riche, and that means one thing: lots of conferences!

Each emirate within the UAE has its own laws, making them distinct in regard to the blockchain industry. The country is overall staunchly pro-crypto, however, even issuing NFT stamps to commemorate its 50th anniversary. As the nation’s business hub, Dubai is by far the regional trailblazer.

The city even attracted Binance CEO Changpeng Zhao, who did not own a home, to purchase an apartment in October 2021. At a forum in Singapore, he was quoted as saying that “The government there is very progressive, and it’s a very good business environment,” adding that he wanted to show a long-term commitment to Dubai. In December 2021, Binance signed a cooperation deal with the Dubai World Trade Centre Authority, which has recently become a regulator in the cryptocurrency space.

Despite the pandemic, 2021 saw the city host a number of large-scale crypto events. COVID-19 has been kept largely under control, owing in part to often-mandatory testing on arrival.

In May 2021, AIBC UAE, an artificial intelligence and blockchain summit, was held in Dubai Festival City, near the construction site of the Dubai Creek Tower — which, once completed, is expected to rise even higher than the Burj Khalifa.

October 2021 saw a slew of events, including Crypto Expo Dubai, which was studded with exotic cars; the World of Web3 Summit, or WOW Summit, held at Atlantis The Palm; and the Future Blockchain Summit, which was a part of GITEX, a massive technology conference where nations and large companies alike set up booths to present their best innovations to the world. The World Blockchain Summit even saw a charity boxing match between crypto influencers.

The second fight, which was the most-awaited, put @loomdart up against @RookieXBT . The fight ended with @RookieXBT winning the first-ever WBC Crypto Belt. pic.twitter.com/ABbEnNFoQl

When compared with the crypto culture of Silicon Valley, Miami and Berlin, Dubai’s vibe is very clearly more traditional — formal as opposed to Berlin bohemian. Especially during the summer heat, Dubai is an air-conditioned, indoor city with a corporate atmosphere. While Bitcoin 2021 in Miami resembled a beach music festival in both its energy and dress code and hoodies remain the uniform of techies on the West Coast, those looking to make it in Dubai will do well to suit up.

As in Miami, yacht parties are a popular side event for conference-goers, providing good opportunities for influencers, VCs, entrepreneurs, traders and, ahem, journalists to rub shoulders while taking in views of Atlantis The Palm, their interactions often lubricated via an open bar. Alcohol is permitted in the city (though entirely illegal in neighboring Sharjah to the north), albeit limited to hotels, private clubs and homes — never in public. Western swimwear is similarly allowed on the beaches, but general modesty is expected elsewhere. Gambling is illegal per Sharia law.

Kirill Mishanin, co-founder of Infodriver Capital, says Dubai is an attractive place to set up a business:

“Dubai is very crypto-friendly and blockchain-oriented — you can easily set up a crypto-related company in the DMCC Free Zone with zero taxes. There are also a lot of events which the government supports, and it is easy to buy cars or property with crypto.”

In addition to conferences, there is a slew of other crypto events, some of them organized informally and others consisting of networking meetups — from rooftop parties to seminar presentations put on by both local and visiting blockchain teams. Among these is the regular EcoX blockchain networking event, held weekly at a speakeasy-style lounge within the Conrad Hotel.

Being a business-oriented city, narratives around crypto’s perceived political goals are largely absent, unlike the grand visions of stereotypical Silicon Valley hackers who bootstrap businesses from their college dorm rooms. Unfortunately, an idealistic 20-year-old college dropout in a hoodie or graphic t-shirt would face an uphill battle to be taken seriously here.

The emirate operates a number of Free Zones — places where non-citizens and non-residents can easily incorporate wholly owned companies to receive visas and trade licenses. DMCC is one such Free Zone, which — in addition to its normal fare of gold, diamond, tea and coffee trading — hosts the dedicated DMCC Crypto Centre in the glitzy Almas Tower overlooking the Dubai Marina. Here, blockchain companies pay zero taxes and can easily sponsor residence visas for owners, employees and their families.

DMCC signed a deal in early 2021 to build a 100,000-square-foot precious-metals refinery that will use blockchain to track metal production and issue “financial assets in the form of stablecoins” — GoldCoin, SilverCoin, PlatinumCoin, PalladiumCoin and RhodiumCoin — that are built on Ethereum, with one unit representing one gram of metal.

There are over 400 crypto businesses in the city, and Ahmed Bin Sulayem, executive chairman and CEO of DMCC, expects the number to increase to “well over” 1,000 by 2023. This view is supported by Marwan Al Zarouni, CEO of the Dubai Blockchain Center, who emphasizes Dubai as a pro-blockchain city willing to create favorable regulations for the industry.

“Five years ago, you wouldn’t see people coming to Dubai to do a cryptocurrency business. […] We’re open-minded, and we’re willing to change regulations with reason.”

The Dubai World Trade Centre Authority (DWTCA) is another Free Zone and has enacted specific regulations to help attract companies involved in cryptocurrency trading, with Maryam Al Suwaidi, CEO of the UAE’s Securities and Commodities Authority, saying that the “DWTCA is looking to support businesses underpinned by blockchain and cryptographic technologies.”

Dubai is the headquarters of many crypto companies, including exchange BitOasis, with MidChains located in nearby Abu Dhabi — the capital of the UAE. BitOasis recently partnered with the Dubai Police Force to establish safety regulations around crypto investments in the region, according to the exchange’s CEO, Ola Doudin.

In addition to zero corporate taxes, the personal tax rate for Dubai residents is 0% on all income of all forms, regardless of whether it is earned in Dubai or elsewhere. While this makes the city a paradise for almost any crypto trader, it is not quite so for citizens of the United States, which is one of the only countries that taxes the global income of non-resident citizens.

Because there is no taxation, concepts like tax returns are foreign. Though individuals have no general obligation to report their trading activity, companies are naturally required to keep accounts in accordance with the rules of the Free Zone in which they are incorporated.

A 5% VAT charged by non-Free Zone “mainland” companies is the only relevant exception, and non-residents can get tax reimbursed upon departure. The UAE’s fiat currency, the dirham, is pegged to the U.S. dollar at a rate of 3.67 dirhams per dollar.

There are a number of local banks operating in the city, though accounts are not generally available for tourists. The country’s lack of taxation combined with tough bank secrecy laws and opportunities for offshore corporate structures caused the UAE to be temporarily added to the European Union’s tax haven list in 2017, although it was removed, alongside Switzerland, in 2019.

In March 2021, the government announced a drive for public feedback regarding cryptocurrency laws, particularly pertaining to the issuance of security tokens. With a soft-handed approach to regulation, trading cryptocurrencies is easy.

Where can I spend crypto?

Kiklabb, a Free Zone whose clients can rent office space on the historic Queen Elizabeth II cruise ship — which is now docked in Dubai — accepts payments in Bitcoin, Ether and Tether.

If you are looking to venture beyond the dock, Elite VIP Yacht Rental Dubai is happy to take BTC, a payment method it describes as discreet and suitable for “people who want to keep their travel expenses private.” Even yacht sales in BTC are not unheard-of.

Visitors wanting to cruise down Sheikh Zayed Road in a Lamborghini or Rolls Royce can head to OneClickDrive, where just about any type of vehicle can be rented using cryptocurrency. Those looking to stay awhile can buy their own ride from Export A Car, which claims to accept any cryptocurrency for its vehicles, ranging from a 2001 Audi to brand-new McLarens and Porsches. JetFinder even offers discounts to those paying for private jet services with Bitcoin or Ether.

A Bitcoin ATM allowing anonymous purchases with cash was installed in a hotel in the Jumeirah Beach Residence neighborhood in 2019 but was removed within a week after authorities took issue with its lack of KYC requirements. According to Coin ATM Radar, only one ATM is active in the city.

The Dubai Blockchain Center enjoys a place of influence, having been personally inaugurated in 2018 by Dubai’s ruler, Sheikh Mohammed bin Rashid Al Maktoum. The center, which is active in helping companies adopt blockchain, offers a certification program through which learners can earn a continuing professional development certificate after taking an exam based on 45 videos that deal with a number of subjects in the area.

The line between being a full-time resident and a frequent visitor is somewhat blurred in Dubai, meaning that many people can also be considered to be living elsewhere.

If you have any suggestions for additions to this guide, please contact eliasahonen@cointelegraph.com.